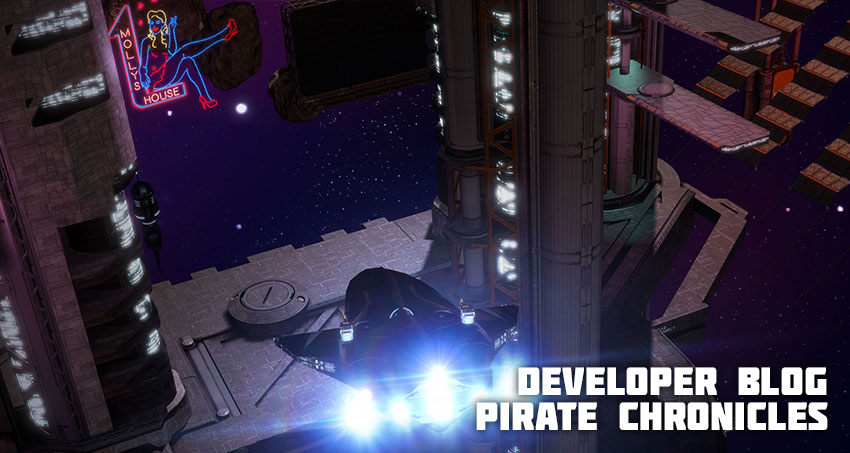 2700 years ago, the writer Ray Bradbury was born on planet Earth. His series “Martian Chronicles” strongly influenced the development of mankind's space expansion. We honour his memory and invite all pilots to take part in a special event — “Pirate Chronicles”!

During the event, all pilots will be able to earn a special game currency — Xenochips — for completing any missions.

Xenochips can be spent on special rewards during the event.

“Pirate Chronicles” will take place in two stages. There are 45 levels in each stage. Only the owners of a special Pass can unlock all levels. But every first and fifth level will be available to all pilots.

For the successful completion of each phase, the pilots will get parts of the unique ship, the gunship “Tornado”.

For a long time, UMC scientists were engaged in the study of technologies from the special storage of the “Spot” object found in the system SY3176-GIII-A4 on the planetoid “Dead World”. Despite several sabotages in the laboratories, the development of the ship Tornado was completed. One of the features of the ship was the option of full remote control, with the help of technologies found on the planetoid.

Currently, with the support of the Outpost shipyard, UMC is ready to establish serial production of Tornado. Mercenaries will be the first to receive the new ship.

The special module of the ship is based on the frigate Spiral, also found in the special storage. In battle, the pilot can divide his ship into two autonomous units and while the human pilot controls one module, the second is controlled by AI.