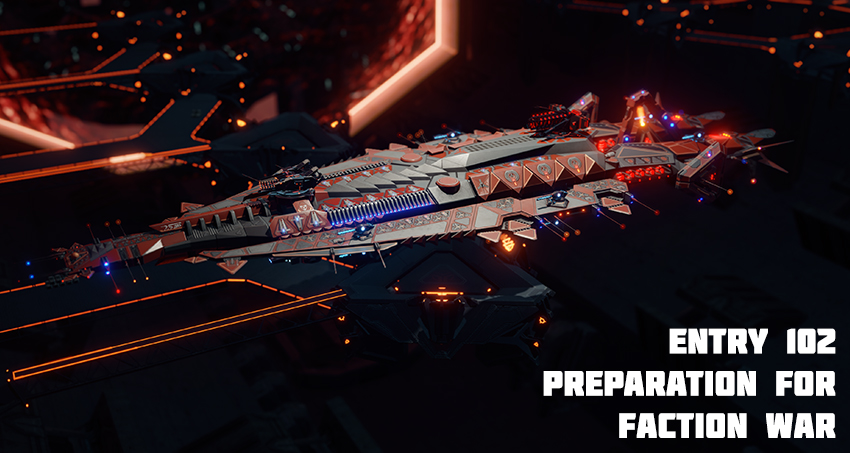 Today we will tell you about some of the new features that will soon appear in the game!

We received a lot of feedback regarding both the design and features of the new Jericho destroyer.

As mentioned earlier, the basic design concept of this destroyer has remained unchanged, however, we took into account your feedback and made a number of changes for the destroyer. It received several additional appearance effects that made it even more menacing! You will be able to check out the changes in the next update!

We have already discussed its weapon — the unique G2 Gauss cannon. This is a real weapon for positional combat. By accumulating a charge, the weapon increases not only damage, but also the range of the projectile.

Another feature of the ship will be a new combat module available only for the Relic destroyer. The ship launches a torpedo, which, when exploded, is scattered into many small mines. After a while, the mines explode, causing damage to the enemy and significantly reducing the radar range of all ships that appeared in the “dangerous” zone of the module.

Nobody knows what to expect from the factions. For the first time since the “destroyers era ” they have such a secretive policy. The only thing we have at our disposal is a message from an unknown group of pilots who accidentally got in touch with the best fighters of the past “Winter Way” tournament. Message transcript:

Perhaps this is another hacking attempt by pirates, maybe one of the factional groups was ambushed by unknown hostiles. We can only speculate about what is happening.

If you can’t wait to measure your cannons and combat skills — do not hurry. The art of war is difficult to understand. We suspect that factions will negotiate to resolve possible differences. Surely the subject of the conflict will be the remains of the forgotten alien equipment from the last invasion. Now, oddly enough, no one openly claims this.

Recruitment of mercenaries, reputation and influence of corporations

But there is good news as well! Despite the fact that the UMC is monitoring the situation, the secret informant revealed the plans for possible combat to us!

Obviously, you must first take control of the sector before getting any profit out of it. Without meeting proper resistance, factions will be able to move across locations and gradually capture them. But we suspect that it will be provided to the right extent, and everyone will take part in large-scale combat.

The factions plan to enlist the support of private corporations to build up their power. For example, participating in the Sector Conquest, a corporation of players, in case of its victory, will be able to place its own base in the location. It will either begin the capture, or support an already ongoing one. The factions will provide everything needed to keep the corporation base functioning properly in return for support during the war. In addition to the corporation bases, the main faction base will also appear in the sector.

According to the source, the bases will develop. For example, if there are no bases of an alien faction in a location, nothing will prevent the faction from leveling up. But! Hostile factions will also be able to place their bases for a capture attempt. If there are alien bases in the location, then the level increase of the friendly one stops or slows down. The base level cannot exceed a certain level as long as there are bases of an alien faction in the sector.

The possibility of sabotage is also not excluded. Surely the enemy base’s level will become weaker if you destroy its stationary objects and guard ships. The victory in sector conquest also has its effect — the more corporations fight for the sector, the stronger their base will be, and therefore the enemy will be weaker.

If the enemy base has lost all levels, it is destroyed, and the sector comes under full control of the faction.

For the pilots to be more interested in fighting for their chosen side, factions are going to offer a number of bonuses. For example, pilots with a good reputation are planned to be rewarded with credits or experience bonuses.

High-level bases will acquire their own workshop — there it will be possible to produce resources cheaper than in the workshop of the main hangars.

The factions plan to pay for the pilots’ flights to their bases on their own. If you are on good terms with a faction, you will be able to move around the sectors it owns for free.

There will also be financial support of the fighters. Sometimes factions will sponsor the pilots with good reputation with resources so that they continue to fight on their side. At the same time, the factions themselves will not refuse material support. For example, by contributing iridium to the development of their shipbuilding, pilots will be able to increase their own reputation.

What is reputation for?

Some activities will increase the pilot’s reputation with one faction and lower it with another. The reputation is designed in such a way that it will not be possible to work for several factions.

Also, reputation affects the relationship between faction ships and pilots with a good reputation with another faction. The pilot’s membership in the faction will depend on his reputation.

In order to support the attackers or the defenders in battles, pilots must complete their tasks and destroy enemy ships.

It is likely that the faction will remain silent and covert recruiting will continue until the end of the special offer from the UMC on training mercenaries for combat - the second stage of the special battle pass.

A number of interesting changes to the competitive segment awaits the pilots in the near future.

We have been collecting your feedback on weekend tournaments for a long time. Based on it and the mode’s analysts, we decided to slightly change the conditions of this activity. Now the tournament will be held only once a week — this way, the players can know where and when the team battles will occur. The ranks allowed for the tournament will always be fixed — from 7 to 9 inclusive. Thus, a larger number of pilots will be able to participate in the tournament: both beginners and experienced mercenaries.

At the same time, we worked on the mechanics of team matching. Initially, teams will be assembled based on the personal qualities of each pilot. However, after the first battle, the team performance will also be taken into account. The opponent for this team will be selected according to the same parameters. For example, if your team performed well in the first battle, in the second battle you will fight against a team that performed approximately the same in the battle before.

And the best part — the mode has been changed from beacon capture to team battle, and the reward for victories has been significantly increased.

Special sectors in “Conquest” and “Portals”

Special sectors will appear on the universe map. There, you will be able to take part in battles for unique rewards.

Periodically, special sectors will be opened for battles between corporations. At the same time, the sectors’ reward system will be different from the usual one. For example, a sector will only be available for one week at the same time with the other, already familiar sectors. But the corporations will be rewarded based on the total influence for the whole week.

Since this activity is unique and temporary, then, as mentioned earlier, the rewards for it will be unique as well. For example, special paints and titles.

In March all pilots will be able to participate in a new team tournament from the game’s administration. We don’t want to reveal all the cards before the official announcement. But we can surely say that the Winter Way tournament showed the willingness of teams to fight and develop in the competitive segment.

That is why in the future tournament, in addition to great in-game rewards, (including those from the “Fury” series), the winners will receive a pleasant surprise in the form of gifts from Targem Games!

Stay tuned, pilots! The wait is almost over!