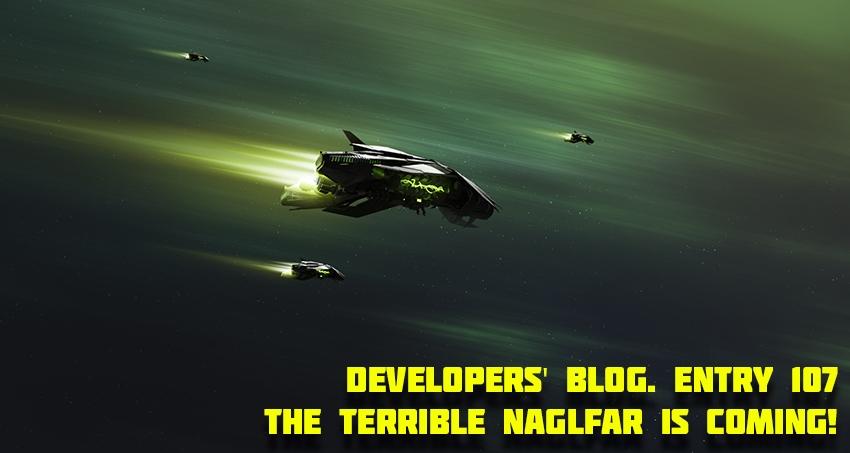 Pilots! We continue to share the latest changes that will appear on the game servers in the upcoming updates. Among them are new modes, events, and of course, ships!

Today we will tell you about the new Jericho frigate - Naglfar

Naglfar is another engineering marvel of the Sentinels. It’s not known for certain what the ship was originally like. According to preliminary information, the fleet of these frigates was sent to Sector 1337, but after another impulse, the communication with it was lost.

The rumors of a horrific incident are spreading across the pubs. One of the ships landed at the UMC station to replenish the fuel and ammo supplies. The color of the Sentinel’s hull was different from the common colors of Jericho. Moreover, the frigate seemed to emit a glow similar to the glow Precursors’ artifacts. Shortly after the landing, something unbelievable happened. The people around the ship started to lose their minds. Many people screamed that the damn AI was trying to steal their souls, that it was getting into their heads. It took less than an hour for the same thing to happen in all corners of the station. The station staff was killing themselves. People were pulling out their fingernails and were ripping pieces of meat off their hands with their teeth. And everything went quiet. Watching this, the Sentinel didn’t do anything. AI has no conscience or shame, but this terrible sight has become firmly embedded in the artificial mind. Being aware of its guilt, the ship left the station. All it could do was to warn his brothers so that no one would make the same mistake again.

During the searches, the Sentinel met a mercenary. His mind was not affected by the detrimental effects of the defiled ship. After listening to the story, he gave the frigate its name - Naglfar. Since then, they have become eternal companions.

Currently, other ships of this type have begun to appear. Fearless mercenaries are not afraid of rumors and make contact with the ships. Perhaps their minds are also protected from ancient curses.

The unique feature of the ship is the “collection of enemy souls”. Sounds ominous, doesn’t it? By destroying enemy ships within a certain radius, Naglfar will receive the “material” or the so-called “souls”, a resource for its special module.
Having accumulated enough souls, the ship can place them in its “its clone”, which repeats the behavior of the main ship. Enemy souls imprisoned in the ship will serve Naglfar until its last breath, or the last charge passed through the circuitry. Each clone will have its own weapons. The more souls Naglfar has accumulated, the more clones can be created. Of course, you can't summon an entire army in a single battle - the central control system of a single ship is not capable of controlling an entire fleet simultaneously.

Witnesses say that the behavior of the risen souls is distinctive from the leader’s ship. Those who manage to survive speak of a strange fog enveloping the ghost ships. It is likely that the fog “emerges” from the River Styx, on which Charon transports the souls of the dead. Who knows when Naglfar steals the soul...

The Naglfar’s unique weapon allows the main ship to engage in positional combat while its ghost servants - clones - will be covering the ship. If the enemy has been destroyed within a certain time after being hit, the ship steals his hull resistance for some time.

The active module allows the menacing dragon named Naglfar to become a main support point for his team. The ship greatly increases the density of matter around itself, increasing its own resistance and increasing it for each ally in a certain radius, depending on their number. At the same time, the ship goes into offensive mode and increases its own speed.