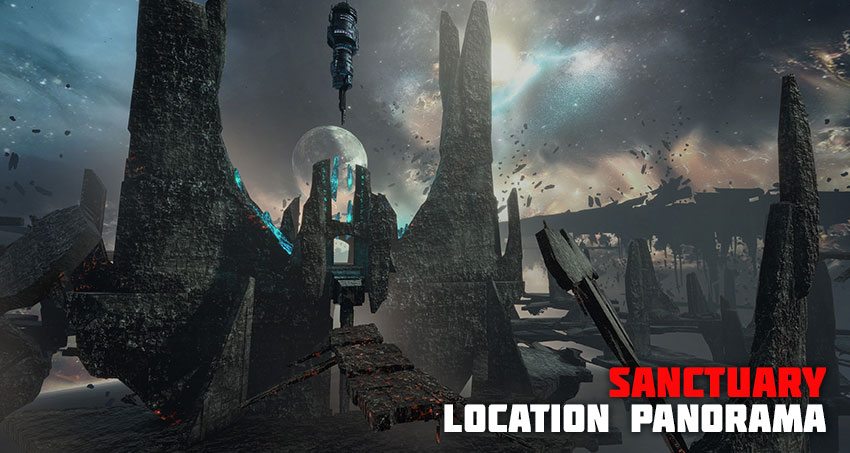 “The greatest discovery in the history of mankind” — this is how the ruins of Precursor civilization in Antaress are described. The tombstone of a bygone civilization, ancient structures frozen on the orbits of the system's planets. This is the first tangible proof of the existence of those who came before us. But many years have passed since the discovery. Research missions became less frequent, and stopped altogether with the start of the invasion. Jump gates installed for scientists started being used by smugglers, pirates and mercenaries. Antaress turned into a zone of endless battles. Gradually, the remains of the ancient civilization found themselves next the remains of our own — skeletons of ships and stations, space debris.

For a long time, it was believed that the ruins had nothing valuable or useful. Recently, however, a ‘Sanctuary’ was discovered in a remote part of Antaress.

This section of the ruins was considered hopeless for many years. Few scientists continued to believe that it may hold hidden mysteries of the Precursors. Turns out they were right. A Federation exploration mission collected assembled with the funds of its leader, Dr. Anton Pavlov, launched to the ruins to prove one simple theory. Dr. Pavlov believed that the Aliens who attacked us, the so-called Crystallids, were not Precursors at all. According to him, they were a tool of the ancients, just regular drones. He also believed that the ruins of Thar had been built not by Crystallids but by Precursors. If so, perhaps somewhere in the depths of these ruins lies the secret of controlling Aliens!

Upon Pavlov’s request, the Federation activated the gate and opened access to the Alien Ruins. However, soon after its start Pavlov's expedition disappeared without a trace...

Now only awakened Crystallids and strange mercenary ships can be found here, which cannot be identified on any frequency.