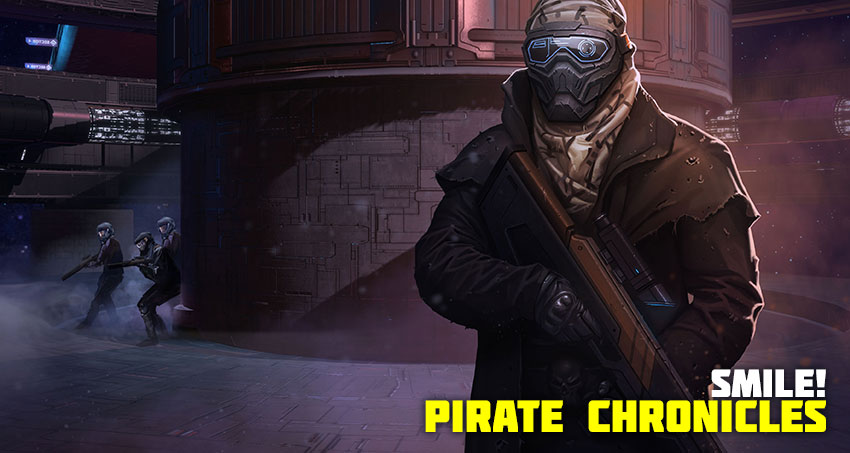 Kidd walked slowly down the corridor of the station inspecting the bloodstains on the walls. His fighters finished the cleanup and soon this small bank office would become completely empty.

— Beautiful — thought the pirate looking at one of the bank guards, whose helmet was removed together with his head. Kidd didn't really like space battles, seeing the opponent's face was different. He could've broken his neck or shot him in the head. When he was convinced that the victim would die for sure and not be saved by some system.

He went to the manager's office with thoughts like these in his head. Several pirates were already waiting for him there, guarding and beating the bank manager in the process. Kidd pulled out the chair and sat down watching the young guy spit his teeth out.

— Well, well, well. Well, hello, land rat — The pirate started talking — I hear you're keeping money here from bona fide Federation citizens. Can you tell me the access codes to the mainframe?

— You won't get a single credit! — The unfortunate manager tried to shout and immediately started coughing — Criminal scum…

At this very moment, Kidd snapped his fingers and one of the pirates hit the guy on the head with a rifle butt.

— Wrong answer. We represent the charity campaign “Artuga Enclave”. The money received will be used to support Sci-Tech engineers who remain with us. — William shouted full of laughter — Well, maybe we'll keep a little money for ourselves. About ninety per cent.

— Let's suppose I tell you the code, what's next? You're gonna kill me anyway. — Almost whispered the manager. — I'd rather this money remain with its owners

— Such pessimism, buddy! You need to change your outlook. — The pirate dipped his finger in a puddle of blood and drew a smile on his mask. — Right now you're alive and can breathe, unlike your colleague, who's playing an important role as my footrest.

At the same time, one of the thugs pulled out a knife and said — Boss. Maybe we should cut some excess off. He'll give us everything.

— Easy, Bill! — Kidd picked up a pass and said — Dear Gregor can become one of us. Why treat our future comrade like that.

— Of course! For helping us a little bit, you will become a fighter of the St. Rose gang and a part of the Enclave!

— Thanks for the help, soldier, but I have to disappoint you. The brave pirate Gregor died in the takeover of the bank station.

Kidd approached the manager and broke his neck.

— A pirate's death to a pirate. And today we're in Rome. Guys, crucify him!

— Sure, Boss! — Pirates shouted and dragged Gregor's body from the office.

William pulled out a communicator and sent a voice message.

— How are you, Anne! Would you like to visit my station tonight and have dinner together? My guys will get drunk as usual, and I would like to talk to a person of culture. You feds are like that.

After sending a message, he wiped the blood off the mask, took a rifle and went to the ship.

— Screw all the laws — thought Kidd walking down the hall. The bodies of unfortunate bank employees lay at his feet.