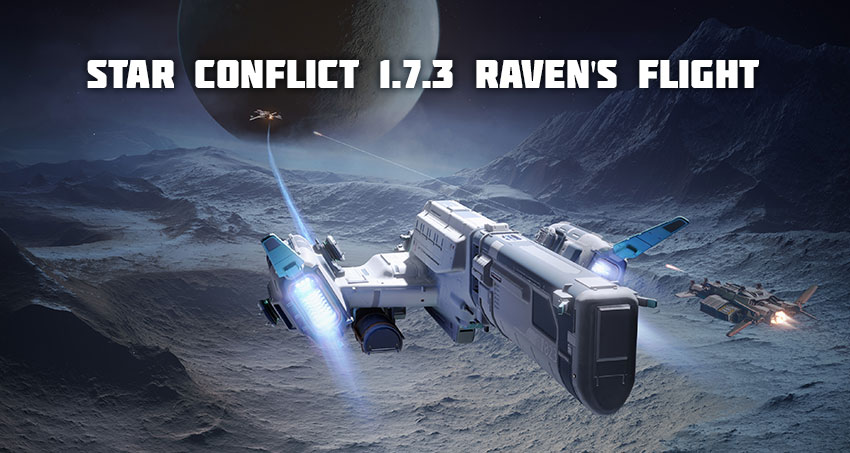 Pilots! UMC engineers offer all mercenaries to assemble a new ship — the guard frigate “Raven”, equipped with a unique combat harpoon! According to the designer's plan, with its help, the ship's pilots will be able to effectively disable enemy interceptors and fighters. Six years ago, on September 4, 2014, Star Conflict was officially released. Since then, the project's world has changed significantly. For six years pilots have been fighting each other in PvP, completing PvE missions, and exploring Open Space.

During this time, new fighters, frigates, and destroyers joined the lineup. We added new weapons and new modules. New locations were discovered.

Over the past year, pilots took part in the events “Moon Race” and “New Foundation”, flew a ghost ship, successfully repelled an alien attack and bravely fought and continue to fight in the war against the Pirates. The game now has unique technologies that improve the characteristics of ships — Seed-chips. Players tried on the role of aliens in the new brawl “Beetle in the Anthill” and flew paper planes in the “Paper Conflict”, and also began to participate in space races in open space. “Pirate Chronicles” event has begun.

The new year will bring us new surprises. And today we celebrate! Festive missiles ‘Spark’ are available for purchase from September 4 to September 13!

Despite problems with the Hammerhead project, the leadership of the Outpost shipyard decided to continue cooperation with Armada. The army needed a universal frigate and engineers began work.

After several months of work, the Raven guard frigate was ready.

In addition to the main model of the ship, the Outpost shipyard has also established the production of a cargo version of the frigate.

Speed combined with excellent combat power allows Raven to go on the offensive together with advanced fighter squads and also quickly escape the battlefield. And thanks to a unique special module, the crew is safe from an enemy attack when retreating.

Currently, the Outpost shipyard has sold the blueprints to UMC in order to make additional profits in case of problems with Armada. From now on, all mercenaries can assemble a Raven for personal use. Special offer! All Defenders of the Universe in one bundle! Pilots! A unique chance to buy all ships of the unique series “Defenders of the Universe” with a discount. The pack includes all three ships:

The ships will only be available at the official project store. The bundle will be available for a limited time. If you previously purchased one of the ships of the series, then its cost will be taken into account when buying the bundle.