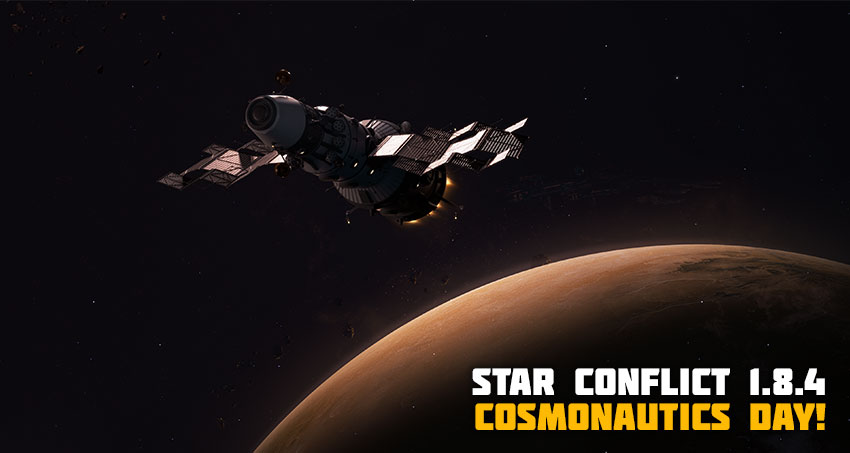 We wish all our pilots a happy “Cosmonautics Day”! 60 years ago, the first manned flight into space took place. In honour of this event, information screens on space stations were updated and there are satellites instead of drones in space. Pilots can complete the special “Cosmonautics Day” achievement and take advantage of special holiday rockets.

Salyut-ST is another development from the Directorium times. However, unlike the proven Spiral and Endeavour, the ship was not mass-produced at the time and the project was frozen. The reason for this is the rather complex design, the offset centres of gravity and the complex alignment of the engines, which prevented that version of the ship from being able to fight with the known ships on equal terms. This ensured the fact that they were not involved in the battle with the “Fringe” fanatics.

The project received a second life during the second Invasion. In conditions of war and limited resources, it was necessary to adopt a fleet capable of fighting and disorienting the enemy without drawing attention. Salyut-ST executed this task perfectly. Despite the external similarities with objects of the first space conquest, the inner shell of the ship was equipped with the most modern equipment of the Imperial ECM ships, the armouring system was redesigned, and the engines were completely changed.

At the end of the Invasion, the blueprints of this model were kept secret for a long time. Now the ECM has decided to start an open development, and the collectors have already offered a handsome price for such a ship.

The pilot can activate and deactivate nodes in the skill tree. In this case:

As its power increases and its rank changes, the ship will change externally - the availability of upgraded equipment transforms it from a museum piece into a modern spaceship!

By upgrading the ship using the same system, you will gradually gain access to the ship’s unique special modules. Upon reaching a certain level, there will be three of them to choose from:

You can get the ship right now by completing in-game tasks for which you will receive xenochips. A unique bundle, containing special parts required for the production of the ship, has become available in the in-game store. In addition, the ship is already available as part of DLC bundles. At the end of the xenochips collection event, parts for the production of this ship can be bought or sold in the trade.

The ship is also upgraded with special parts - Monocrystalline plates, which can be obtained by holding the sector in “Conquest” and “Portals” modes. They can also be studied in a workshop, dismantled into monocrystals or sold in trade. 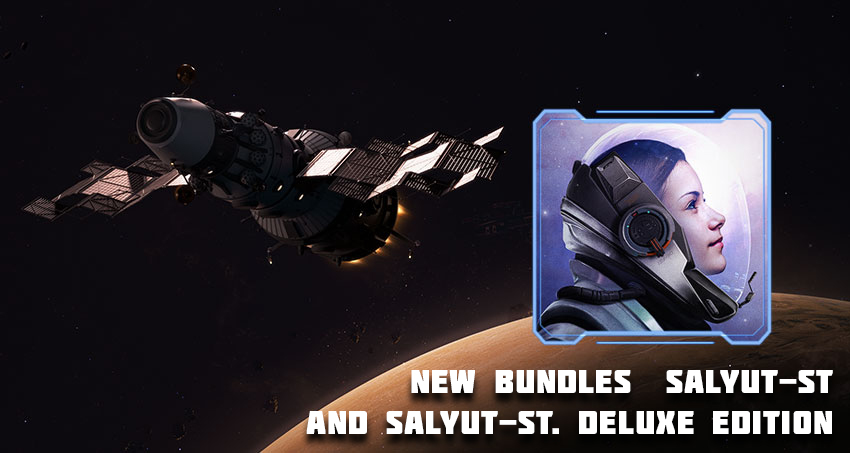 Pilots! The “Star Conflict: Salyut-ST. Deluxe edition” and “Star Conflict : Salyut-ST” packs are now available in the in-game store. The bundles will be available for purchase until May 11. There are no restrictions on using the “Salyut-ST” ship in the game. A new stage for collecting the special game currency — Xenochips — opens from April 8 to April 28! For a limited time, special items in the in-game store can be bought with xenochips.

Bundles are available for purchase in the game store. Xenochips can be received as a reward for completing special tasks. New unique holiday stickers and a new colouring scheme have become available. The pack will be available for a limited time!

You can get all the stickers and the paint in a special container bundle. To do this, you will need to go to the “Bundles” tab and select “Festive Bundle №12”. The cost of the bundle will be automatically reduced if the player already owns stickers from the bundle. Pilots! In honour of Cosmonautics Day, the ships Endeavour and Spiral get unique colouring schemes, available only in the bundle “Cosmonautics Day”. Ship components “Lost technology” Spiral and Endeavour can be obtained in a special container bundle “Star Conqueror”. The container is sold for galactic standards.

Collect the legendary ships in a special holiday painting!

Please note that the Cosmonautics Day and Star Conqueror bundles will be available to players for a limited time.

The list of blocked modules for e-sports modes has been expanded:

Fixed a bug with the ability to equip prohibited items when playing in “Portals” mode.

Fixed the inability to open some containers with limited storage space.

Fixed a bug in the description of the module ”Vertical takeoff engine assembly”.