Attention all pilots! UMC announces the start of the special event “Asteroid conqueror”! The event will last until May 26. Only during the event the pilots will be able to receive the “Mole” ship components when destroying asteroids in the “Open Space” mode.

With the beginning of the Second Invasion, the UMC leadership decided to create a miner ship so that they would not have problems with resources in the future. A contract for the development was signed with Scott en Cott corporation. It was the Federation scientists who had to create a frigate.

At one stage of development, the CMS joined the project. After providing some equipment for Mole, the corporation ordered a large batch of ships, and then acquired a production license in a limited number.

Upon completion of all works, the first batches of ships were immediately handed over to the UMC. Currently, mercenaries can buy Mole directly from Scott en Cott corporation or through intermediaries at the Center. The corporation’s shipyards have already received large orders from various organizations and it is safe to say that Mole is one of Scott en Cott’s best projects, which allows to receive unprecedented profits.

A mining laser. Increases the time during which an asteroid may exist at critical temperatures without exploding.

Gradually restore shields and hull of the owner. The drone can be sent to the selected ally. If the ship’s durability reaches critically low values, the drone activates emergency regeneration. The drone has no weapons.

The beacon was designed by UMC to send drones directly from the stations to the ship. The system allows you not to fear the possibility of drones being destroyed while waiting for cargo. Currently, many stations have received UMC installations for launching drones instead of the old ones.

Changes in the asteroid mining system

Removed the percentage display of the asteroid heating. Now the heating is determined by a graphical color change of the asteroid itself.
Asteroids are still divided into several groups by mining.
When trying to extract minerals from an asteroid there are several levels of resource mining, depending on the level of the asteroid’s overheating.
Added the parameter of asteroid overheating. If it is exceeded, the asteroid will explode after a while, regardless of whether it is being shot at or not. In order not to lose the asteroid, it must be cooled down completely. 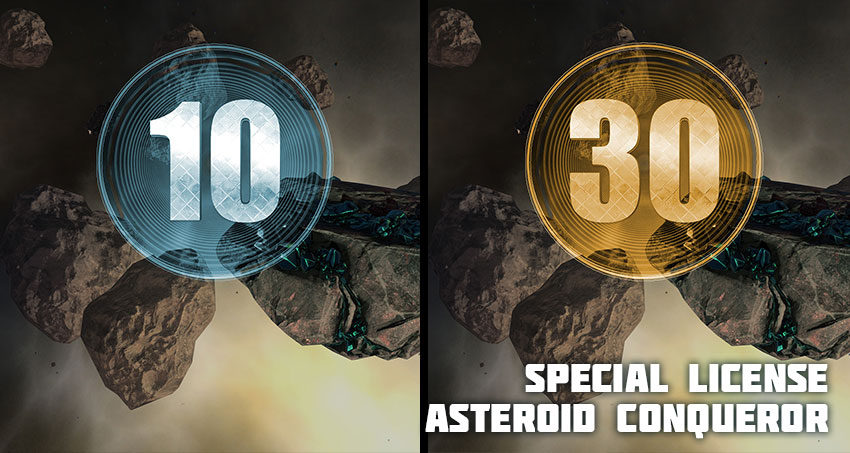 Especially for the pilots participating in the event, we have prepared a special license that increases the number of “Mole” ship components obtained from asteroids.

Players can receive new achievements for winning in the “Orion’s Belt” mode: During the holidays, all pilots will get access to special bundles with weapons.

The “Rain season” transformer is no longer considered an eSports module.
“Salyut-ST” ship components can now be traded.
The maximum number of Monocrystal plates in storage is now limited to 40.
Now, only the ships of ranks 10-15 can enter the South-West and North-East portals.