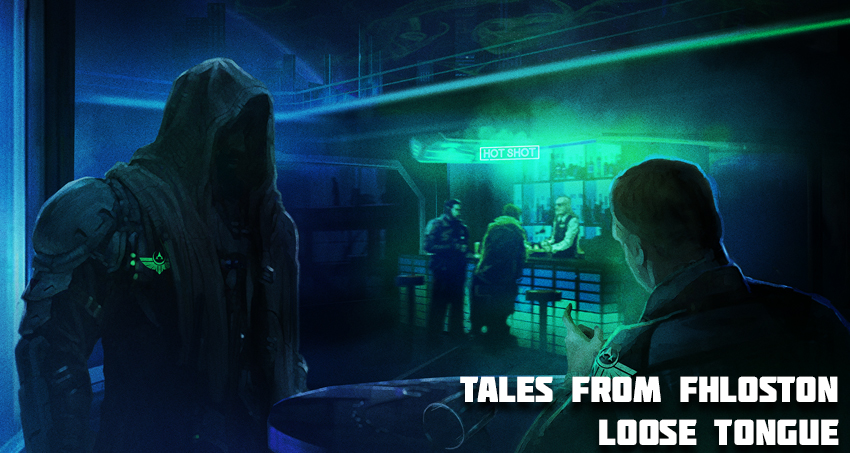 It happened in the evening: the local sun had not yet crossed the horizon, the heat of the day began to gradually decline, providing a small place with a slight coolness. The sand of the beaches slowly cooled down, the calm and peace seemed to be spilled in the air. The exact opposite of this calm were bars and nightclubs — they came to life, filled with their exuberant energy. The bar of the “Excelsior” hotel was no exception.

The irreplaceable bartender Andrew-9-D-9 struggled to cope with the flow of guests that evening:

At that moment, a companion of mercenaries walked into the bar, humming: “Can you hear our shouts and drums? We are here for the rum!”. Nobody paid much attention to them — there are enough rum lovers in the Galaxy, and these ones have been resting here for a whole week. The bartender performed a heavy sigh and filled the glasses with amber liquid.

The mercenaries had fun, sang old songs, drank a lot, which made them more and more enthusiastic. Then they noticed a man sitting in the corner with a mug of beer.

— Hey, buddy! Tell me, why do you sit in the corner all quiet? Andrew ! Rum for everyone!

The bartender brought them two bottles at once saying that he knew that they would not stop at one. Twenty minutes later, the mercenaries and their (as it turned out) colleague James swore an everlasting friendship and began to share different stories with each other. And so James, who got braver because of the drinks, began his story:
“Guys, a week ago I was looking for a good contract and I was passing the Felony system on my frigate, you know, a bunch of all kinds of abominations, abandoned imperial laboratories, all that sort of thing? And so,my radars found something. I decided to check, I’m a UMC mercenary, I’m not afraid of anything! So it turned out to be a crashed ship. The cabin is destroyed, the engines are dead, but the cargo hold is still intact. I didn’t think long and collected everything that could be collected — that must be interesting! And so here I am, flying to my next destination. I decided to look at the stuff that I got. The boxes were sealed. And they had — you’re not going to believe this — they had Warden insignia! Well, I thought, right — Wardens, sure! I try to open these crates but they won’t budge. I tried the crowbar, the electronic lock — they just won’t open.”

— Come on, you’re lying! Wardens haven’t been seen in a while. If they’re still around, they’re hiding somewhere in the corners of the Galaxy!

— I’m not lying! That’s exactly what happened. Well, I found another black box, like... like a flight recorder sphere. You know it’s not just a box.

— What was inside?
—I don’t know how, but there were fresh data logs! So, Horn’s friend hacked them for a couple of hundred credits! And he prompted a friend who would pay for them significantly. And it was my lucky chance! I can live like this for a couple of years and I’ve also bought myself a new ship.

At that moment two people approached the table, but no one noticed a faint smirk on their faces.

— You guys sharing some stories here? — Do you mind if we join you? Bartender, bring us a bottle of the best cognac you can find! It’s on us!

— Right, so in that box there was information about some stuff about stations.

At that moment, one of the strangers twitched and a small cocardia under his jacket became visible for a moment. Andrew made a search request on the net and was waiting for a response.

They shared stories until morning and then the rum enthusiasts left the bar. At 4:30 Anrew figured out the meaning of the cocardia: one of the Wardens had the exact same one at the military exhibition review back in 4503. James was left at the table alone with two stern eyes. One of the imperials smiled and started talking.

— Come on, slick! We have something similar to your find, can you get us in touch with your friend? We’ll give you a third of the price!

After that, they left the bar together. Since then, no one has seen James — neither on Floston nor anywhere else.