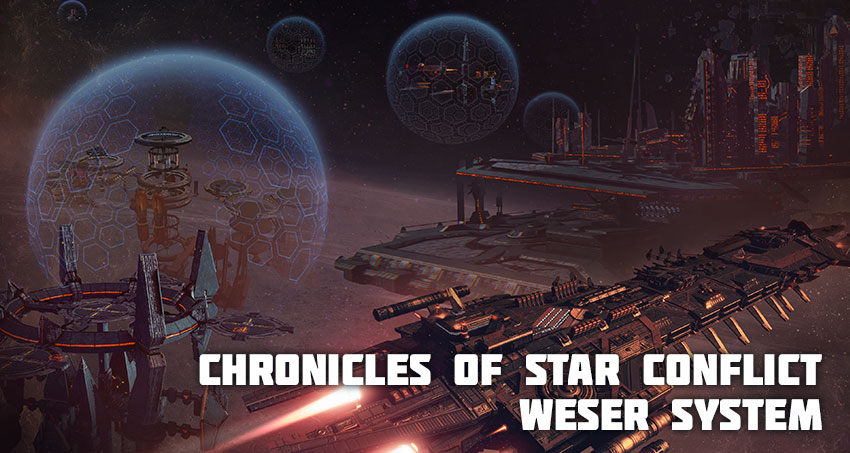 The UMC continues to talk about current events in the Star Conflict universe. Today we are talking about systems that pilots in the game cannot fly into yet.

With the discovery of the warp jump technology, the settlement of the furthest corners of space became only a matter of time for the Direktorium. One of the waves of colonizers rushed to the galactic south, where it was planned to establish the most distant colonies. Soon the Weser system was discovered, which became the furthest dominion of the united state of people. The government had high hopes for the new colony. More and more ships were sent to explore the region and extract the minerals that the system was rich with.

Ironically, the first attack of Jericho fell exactly on Weser. Right after the rapid destruction of the only orbital station in the orbit of Weser-2, the colony capitulated and announced its withdrawal from the Direktorium. The Weser system spent almost the entire war as a transshipment point for the Raid ships. Despite the fact that legally Weser is a part of the Republic of the United Colonies, created after the end of the First War for the Bartle sector, the system is under the full protectorate of Jericho, similar to other members of this small state. The systems of the Republic are blocked from the possibility of trading with anyone other than the followers of the Fringe.

For a thousand years, Weser has been providing its resources to the Departed in exchange for protection, since the inhabitants of the system are forbidden to have their own military forces. Neither the Third Bartle sector War nor the Alien Invasion forced Jericho to leave the colony. And although the Jericho people rarely communicate with the colonists, they generously share their technologies as they become obsolete. During this time, Weser residents began to firmly consider themselves a part of Jericho. Lots of them go to the UMC in order to serve their patrons later.

Currently, the Mendes family continues to build infrastructure in the orbits of the planets of the Weser system, demonstratively showing that these territories will always belong to Jericho.