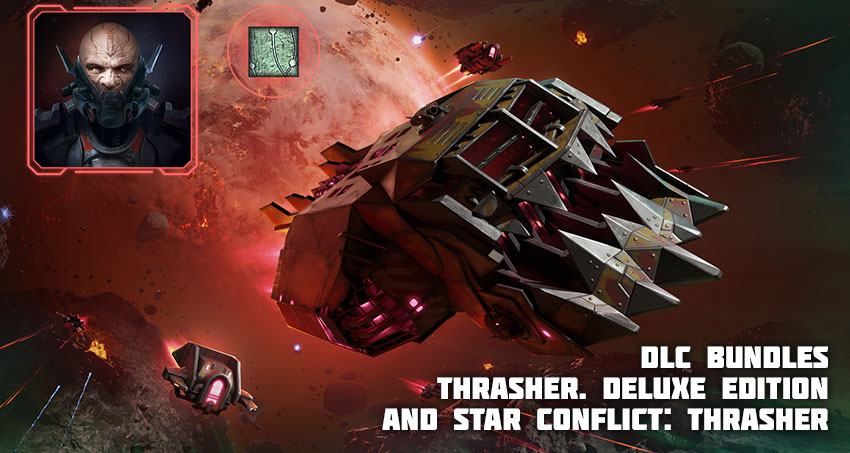 In the past, it was the Imperial mining ship “Digger”. It’s not known for certain who was involved in the modernization and transformation of the frigate. The survivors of the Doomed Flotilla were rumoured to have had a hand in this by trying to escape from the infected sectors. The ship’s old hull was badly damaged, and so it became the carcass on which the new plating from various scrap metals was attached. Somebody thought it would be a good idea to use some of the metal to create a fearsome look for the frigate.

Thrasher was seen as part of a small group of Butchers under the command of Graml Rusty. Soon, the mercenaries destroyed the thugs involved in the destruction of cargo ships. The unusual frigate was captured with almost no damage and taken to UMC. At the request of the mercenaries, Thrasher was studied by the qualified engineers. In a short time, a version of the engineering frigate was developed based on this prototype. Despite the appearance remaining the same, Thrasher has seriously changed. What was once scrap metal has been replaced by superior armor and the power system has been brought up to the standards of modern engineering ships. The ship also received new weapons developed at the UMC.

Thrasher is currently being manufactured in single units at the UMC shipyards on special order. It is very likely that the ships could appear in the service of pirates, involved in the purchase of ships through proxies.